Dr. Geo is an open, easy to study, modify and extend interactive geometry software working on most platforms and tablets and even XO. It is distributed with its source code that you can modify while using it. Dr. Geo XO bundle was downloaded more than 180'000 times! And DrGeo won several prizes. Ten years old kids use Dr. Geo to explore Euclidean geometric sketch, agile kids extend and program it with its embedded dynamic language and user interface. 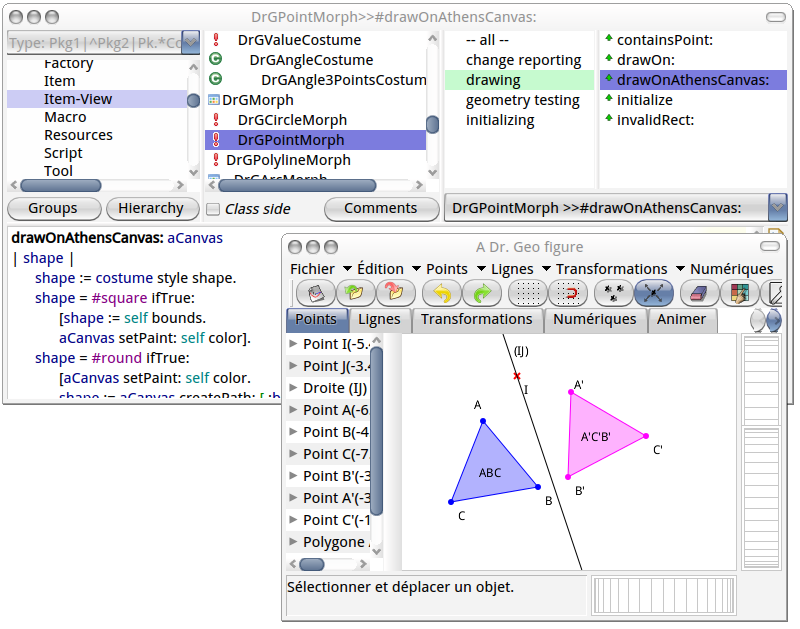 What sets Dr.Geo apart from the other geometry software is the possibility of studying and even modifying/extending its source code while s/he is using it to create a figure.

All in all, its philosophy is also to empower the user with direct access to the Dr. Geo arcane and programming. For example, with script, one can build a geometric sketch to compute the slope at an arbitrary location of a given curve. Dr. Geo is Modify-me Ready! But don't be afraid, if you only want to design interactive sketch, Dr. Geo is intuitive and easy to use.

Programming in Pharo is addictive, fun and fast (H. Fernandes)